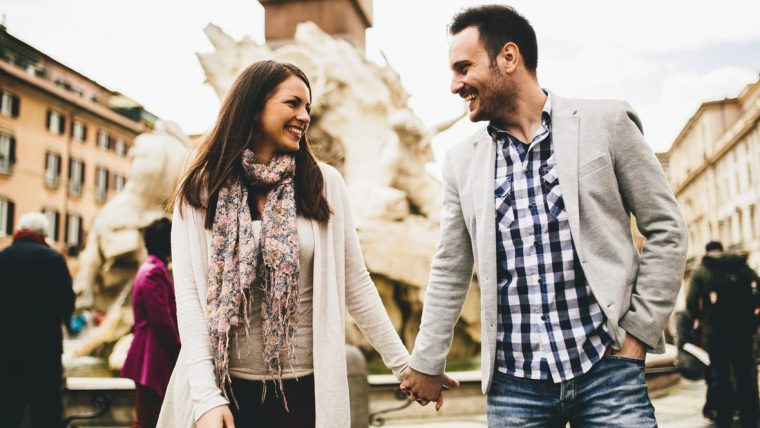 The Virgo man sometimes seems unapproachable. You might be crazy about him but fear that he will look at you like there are antennae coming out of your head! While he may seem intimidating, he’s actually a big softie.

If you are in need of figuring out how to approach the Virgo man you are crushing on without scaring him off, I can help! Keep reading to show a Virgo man that you’re interested.

5 Ways to Show a Virgo Man That You’re Interested

1. Care About Your Appearance

The Virgo man loves a woman who is fit and takes care of herself. Being clean, tidy, and dressed nicely impresses him. This is especially true if you know you’re going to be out with him in public.

Whether you’re at work or somewhere social, you want to look like you took a little time in the mirror before you left the house.

You don’t have to wear tons of make up or anything like that. Just be sure your hair is neat and you don’t look like you rolled out of bed. Less is often more for him. He doesn’t like it when women put on gobs of make-up like they got into some crayons!

He loves a woman’s real and true beauty, so anything you can do to accentuate that will be a turn-on for him and make him pay attention to you without you saying a word.

When you like him, you need to make it apparent. The only way you can do this is to lose your shyness and go talk to him.

Always make it a point to spot him in the room and wave, wink, or walk over and make conversation. If he notices that you keep popping up where he is and you acknowledge him right away, he’ll love it.

The Virgo man wants to feel special but not stalked. Don’t follow him around. You don’t always need to show up where he’ll be, but doing it sometimes is nice.

Be excited to see him but not too eager. Make good conversation by asking him what his favorite types of food are. You can ask him for recommendations (hint, hint!).

Just try to be friendly. Virgo men adore women that are willing to be friends first so they can truly get to know each other. They like taking their time.

Be sure you put your hand on his hand or on his arm when you talk to him and laugh at his jokes. That will get his attention.

It’s no secret that a Virgo man can be sort of oblivious when a woman likes him. He thinks she’s being nice or friendly but isn’t sure that she likes him for more. He won’t approach her with it either because he doesn’t want to get shot down.

On that note, you will need to flirt in a way that is rather direct. From one of my favorite Virgo men: “Just tell him!” If you’re going to take that approach, you can say, “I would really love to get to know you better.”

That way he knows your intention and he knows he can take the next step and not get turned down. This gives him the confidence he’s looking for—Virgo men can be rather shy.

They seem outgoing, but the truth is that they are typically pretty darned bashful. They aren’t sure what to say or how to say it. If you make the first move, it makes it easier for him to take up the slack and ask you out.

You can even try asking him to join you for a cup of coffee or a drink. Bust a move to let him know you dig him. He will be grateful you did.

This works for just about any red-blooded male. If you like him, ask him what he likes and then try to cook for him. This is a good way to get him over to your place or you to his.

It’s totally worth it to get a Virgo man to eat your home-cooked food—even if you need to buy your first cookbook. He sees this as very sweet and considerate.

He’s looking for a woman who is going to take care of him in that way. This is true even with the Virgo men who are really great cooks. They still want to be taken care of sometimes.

You don’t have to have sex with him that night. In fact, I recommend you don’t. It leaves a better impression on him when you don’t dive into bed with him right away.

He wants a woman he can take home to meet his family at some point, and he isn’t likely to do this with a woman who is eager to have sex with him off the bat. He loves the classy lady that will wait until she knows it’s time.

He’s a very classic, old-fashioned type of guy. You can get his attention by wearing vintage clothing, too.

Read next: 5 Ways to Tell If There’s a Future with Your Virgo Man

You never want to hurry with a Virgo. Don’t rush him to take you out. Don’t text him constantly, and don’t act like a schoolgirl with a crush. Even if you do have a crush, less is more.

He’d rather be face to face or talk on the phone. Remember, old-fashioned. He wants to court you, and that takes time. Let him do it the way he feels comfortable with.

If you hurry him or try to put a title on the relationship before he’s actually ready, he’s likely to either clam up or pull away all together. He knows he doesn’t need a partner to be happy in his life.

He would like to have one, but only if she allows him to be him and doesn’t try to rush him to the altar. He will go when he’s ready and not a moment sooner.

When you take it slow and don’t act too enthusiastic, you make him more interested in you. You won’t appear to be needy or clingy when you give him time and space.

I hope this has helped you gain some useful perspective so that you can successfully get that Virgo man to take you out! Just remember to take it nice and easy.

When you let things move at a natural pace, he’s more likely to fall for you. Show him your independence, your success, and your ability to do things for yourself.

Don’t text him all day long. He doesn’t like a woman who is constantly on him to talk to her. He does like having time to himself.

Let him have that personal freedom and you’ll learn that the Virgo man is one of the most passionate and giving lovers out there. When you show him the real you, he’ll open the door and let you in.

Did you win the heart of a Virgo man? What did you do that made him bond with you? Tell me all about it! Share your story (or questions) with our community in the anonymous comments.

Your friend and relationship astrologer,