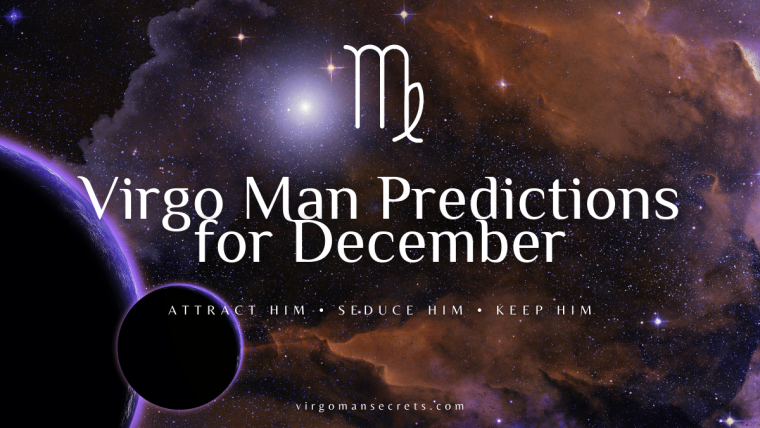 Hello, my darlings, how do you fare during this holly jolly season? I hope you’re managing and you’re not at your wits’ end – for I come bearing the fruits of the cosmic labor in the form of the Virgo man’s Horoscope for the last month of 2022.

Buckle up and let’s dive into it!

The beginning of the month puts the Virgo man in a tight spot because he is asked to tend to two things at the same time, and since neither teleportation nor cloning is made public yet, he’s got a conflicting schedule on his hands. This might not be the best time for you to pester him about romance and dates, but it is a good time for you to be there for him and help him with a situation (or two).

The second week has a Full Moon in Gemini, but more than that, it puts the Virgo man in a position where he can choose between practicality and idealism. Ideally, you’ll find a way to combine the two and show off your best and simplest qualities during this time.

The third week allows the Virgo man to put an accent on himself and his ideas and needs come to focus. The second focus he has will be money and finances, although let’s be honest, when is he NOT focused on money and finances? This might affect your dating life because he’ll want to be on a budget that he has imagined for himself at this time, so if you can, be flexible about it.

The fourth and final week holds potential not just for your relationship to grow to be more stable and productive, but also for yourself. See where the New Moon takes place in your chart and work on the goals and ambitions tied to that life field. It’s a perfect time for it!

If I Was The Master Of Time, I’d Still Feel Short Of It

The start of the month might have a bit of an unnerving influence on the Virgo man’s mind, thanks to Mercury being at the final degrees of Sagittarius (its detrimental sign), in his fourth house – the house of domestic matters and family.

It’s possible that he will be asked to spend more time with the youngsters of his family abode, or even to act as a nanny for a couple of days. This won’t be so bad, since animals and children naturally gravitate toward the Virgo man and like him.

The trouble is, during this first week he might also be called to travel and to go either out of town or abroad in order to manage some of his (urgent) affairs, and that can create a problem in his schedule with babysitting and being needed at home.

Now is not a perfect time to press him for free time or romantic dates. It’s best to act as a backup healer from one of his online game campaigns – he’ll appreciate that much more than any expensive gifts or vouchers you can think of. Just be there for him, to lend him an ear and even, perhaps, do a minor chore for him, or help him with one of his tight obligations…

Falling In Love Or Counting Money… Why Not Both?

At the start of the second week of December, there’s a Full Moon in Gemini, in the Virgo man’s tenth house, and his ruler, Mercury, moves to Capricorn, his fifth house of fun and romance. This is a tight aspect in terms of his professional and public life and might come under scrutiny, but at the same time, he’ll feel blessed to have Mercury move to a focused and no-nonsense Capricorn.

The second week offers a great time for romance with the Virgo man, and it’s a perfect transit for you to be direct and naughty with him. He might give off professional and focused vibes, but that just saves time in the long run. If you have any serious intentions towards him, now is a perfect time to make them known, and to do so boldly and directly.

This week is a perfect opportunity to go on dates that have a cultural dimension to them, such as museums that focus on art or archeology and history, and to visit very old restaurants or small food shops that offer unique goods and tastes you can’t find anywhere else.

The Virgo man will be in a quite romantic and idealistic mood this week, despite Mercury moving into Capricorn. He’s an idealist in his heart, and current transits offer fertile soil to plant the seeds of love. Spend time next to a body of water or go stargazing, both activities will show you in the best light in his eyes…

Saturnian Energies Are Heating Up

During the third week of the month, there are celestial preparations for the Super New Moon in Capricorn. The energy can already be felt thanks to both Venus and Mercury moving into Capricorn, where the malefic Pluto has been residing for quite some time now.

Since the Moon is traversing through his first house, you might find him quite self-centered and focused on his own needs during this week; but he also might be prone to nitpicking at unimportant details of your arrangements.

Be happy if he’s being difficult about the arrangement details, and not about the parts of your personality or your habits he’s deemed unnecessary for you to have. The Virgo man can be so difficult and complex at times, I swear…

This is a good moment for dates that are simple and yet “effective” if you catch my meaning. You don’t have to spend a lot of time thinking through the romantic affects your dates will have at this point in time. It’s more important for you to be direct and honest about your desires and wishes with him during this period.

Read Also: What A Virgo Man Wants in a Woman

The fourth and final week sports a hefty Super New Moon in Capricorn, which is great news for the Virgo man’s romantic life and fun in general. But, we have to take into account that although it’s his fifth house, it’s still Saturn’s playing field.

This means that a certain measure of seriousness, grounding, and commitment is being called for here. This is a great time to solidify your romantic entanglement into something more serious and long-lasting. If you’re up for it.

If not, he will find ways to make this a productive time about, you guessed it – money. This is a perfect moment in time to “bag” him for the long run. Especially if you’ve fallen so hard in love with him that you can’t spend your day without him.

If that is not the case, this can be a productive time for you in his life, in the role of a pragmatic advice-giver. Don’t be aloof, use this potent celestial shift for your own needs as well.

See where the New Moon falls in your Natal and Solar revolution charts, and act productively in those fields. Saturn may be harsh and strict, but he has never left anyone hanging who has put serious effort and hard work into something they wanted to achieve.

And there you have it my darlings – the Virgo man’s December in the palm of your hand. His mood might be a bit irritable during the first and third weeks but otherwise, he should be open and ready for sexy cooperation.

Romance will be at the forefront of his mind during the third and fourth weeks, and there’s going to be ample opportunity for you to cement your presence in his daily life. Don’t be too coy or shy in your approach during this time, and you might see wonderful shifts take place between the two of you.

I sometimes hear from readers that while these Horoscopes are helpful for their romantic lives, they crave more detail and more specificity for them. This is totally understandable, and I have figured out a way to make sure you get all the information that you need to take advantage of transits and to know what pitfalls to avoid.

I’ve created a spot here where you and I can talk personally about your own concerns and how to best create the relationship that you have been waiting for. I love talking to my readers and getting to know them as people – and truly, what have you got to lose? Connect with me here.

Wishing you love and light on your journey.

P.S. I just released the 110-page Virgo Man Secrets for 2023! It’s the most complex digital yearly forecast I ever did for Virgo men. You might want to check it out!

One thought on “Virgo Man Predictions For December 2022”