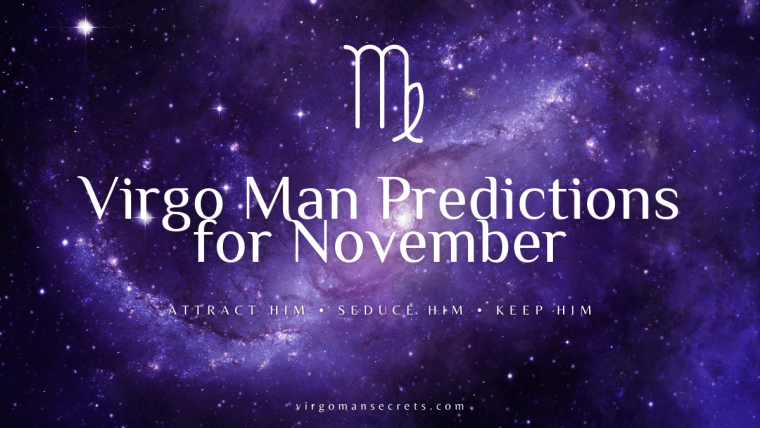 Hello, my darling readers, how are you? I hope all is well and under control on your end, for I come bearing November tidings for the Virgo man. Fall into step with me, and let’s see what awaits him together.

This first week of November is an absolute banger for the Virgo man when it comes to obligations and things that need to be done. He would forget his head if it wasn’t attached to his shoulders during these days, so it’s best to just leave him be, or simply help him to lighten the load of chores.

The second week blasts off with a Full Moon in Taurus Eclipse, and the Virgo man needs to be extra careful in traffic. He should not be getting on his motorbike during this time, nor should he drink and drive. As to whether he should drink at all, I leave that to him.

The third week of the month is good for confessions and endings. It’s a great time for finite plans and the execution of ideas that will put an end to something. This is also a great time to speak about your dreams, and to write down the omens you might get from those very dreams… It’s a week filled with prophetic energies.

The final week of November brings forth a nice change in pace and good, positive vibes. There’s a great New Moon in Sagittarius on the 23rd, and the Virgo man should use this week to spend time with his family and loved ones and to get out of his mental rut.

No Rest For The Wicked…

The first week of November puts the Virgo man in a very pensive, deep, and serious mood thanks to Mercury entering Scorpio and his third house of pondering and communication. His regular mental processes will slow down and take a more serious turn.

At the same time, Pluto, Neptune Retrograde, and Jupiter Retrograde are casting a serious light on his relationships and love life. Saturn is asking him to take his health and daily routines more seriously and to make time for everything that is necessary while discarding all that isn’t – which is extremely demanding of a compulsive person, as we already know.

The Virgo man is being asked to reevaluate his daily work routine and his career goals (thanks to Retrograde Mars in Gemini). So, to say there’s a lot on his plate right now could be an understatement.

The Virgo man will be under a lot of, either self-imposed or circumstantial, pressure right now, and even if you try your best to help him relax, he might not be able to do it. Therefore, this week is perfect for checking things off the to-do list and helping him to lighten the load of it, rather than forcing him out on dates and to do romantic stuff.

Full Moon In Taurus Is No Joke…

The second week kicks off with a Full Moon Eclipse in Taurus in the Virgo man’s ninth house. There’s strong opposition to Mercury, the Sun, and Venus during this time, in his third house, so it’s advisable for him to stay off his bike, and to be extremely cautious in traffic.

His mood will be very pent-up, and he might have verbal outbursts around the house. It’s also possible that he’ll feel the need to turn to substances during this time because he’ll feel crazy if he doesn’t – remember, this is a man who doesn’t know how to relax consciously.

This is a very good time to release old romantic wounds and to heal together – not in a forced way, but rather by doing something spontaneous and chilled out. If there’s a conversation meant to be had, you’ll have it. If not, then you’re just meant to sit in silence and vibe together. Either way, do it!

There are no rules on how you release and let go of certain things and inner turmoil. There’s not one right way to do it, so do it in a way that suits you and makes you feel best. This is a great week to release outdated thinking patterns, attitudes, and beliefs, and to start working on adapting and accepting the new ones.

What Have We Here?

The third week of November is the week of endings for the Virgo man. Both Venus and Mercury (his ruler) are closing in on the final degrees of Scorpio, all the while trining Jupiter Retrograde in Pisces (his seventh house). This is a great time for him to get a load off his chest by confessing both his past deeds and misdeeds.

If his love relationship survives this week, it’ll go on for a long time, let me tell you that…

This week his dreams will be vivid and he’ll be susceptible to having premonition dreams that hold important omens for his waking life. If you remember, ask him what he dreamed about, it might be important, and it also might serve as an easy trigger for him to open up to you and ‘spill the beans.’

This week is a good time to do something finite. To execute some plans and ideas that will help both of you close a previous chapter and move forward with a clean slate. It’s also a good week for Netflix and chill, and for hot chocolate.

Get Up, And Go About!

The final week of November gives the Virgo man an opportunity to relax more, have fun with his family/housemates, and do something that will lift his spirits now that he has cut his losses.

On the 23rd, there’s a very positive New Moon in Sagittarius, taking place in the Virgo man’s fourth house of home and family. So it’s a great time for him to start something new and fresh; something, perhaps, that includes his kids or younger people from his home.

It’s true that his ruler, Mercury, doesn’t feel all that capable and dandy in Sagittarius, but this is an overall positive and enthusiastic territory, so his mental state should be fine.

This is a great time to do something fun and get into adventures and interesting activities as well as debates. Ask him out on a date to an escape room, play online video games together, or simply go to a bookstore or to a board game store, and have your way with fun there.

Just go out and about, it’s high time for the Virgo man to get out of his rut, and make the most of this new, positive, and enthusiastic energy.

The Virgo man will be under a lot of mental duress during the first couple weeks of November, so it’s a good chance to let him have his inner peace, and help out in any way you can with his obligations and chores.

It’s also a good time for him to think about his health and overall mental state. There’s not a lot of wiggle room for romance and dates on his daily agenda right now, but there’s always space for receiving help.

When the fourth week and the New Moon come, let loose, and have your way with him – ask him out on dates, plan fun activities and do something to make him relax (and in the process, remember to relax as well!).

If you are still having doubts about the state of your Virgo man or feel as though your relationship can use a little bit of a boost, then you might want to book a VIP consultation with me to solve your burning questions.

This way I can dig deep into your unique situation and you can come out on the other side feeling more connected than ever. I’ve reserved some spots for my readers, so if this feels like a call you need, book your consultation with me here.

Until next time, my lovely readers – I wish you all the luck in the Universe on your journey!

One thought on “Virgo Man Predictions For November 2022”