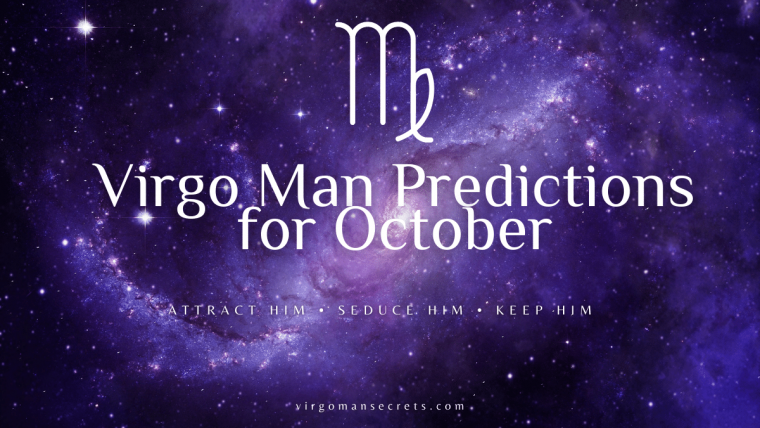 Hello my dear readers, how are you? I hope all is in order and ready for you to take a breather, for I come bearing predictions for the month of October. Take your break and let’s dive into this one together.

The first week of October serves as a portal to one of the most important lessons the Virgo man will ever learn – emotional expression and directness. This is a good time for revisiting old and emotionally-meaningful places if you’re going out on dates, and a good time for coziness that comes with visiting gardens and spending time near the trees. Starting conversations in these kinds of places can be very therapeutic and productive at this point in time.

The second week is like a checkpoint in the Virgo man’s life, especially as the Full Moon in Aries aspects his eighth house of partner’s money and hard emotions. Now is a good time for the Virgo man to learn his lesson in letting his emotions show when they arise, instead of piling and filing them up for later and building up inner pressure.

The third week makes for a favorable time for a Virgo man to express his witty self in a social setting, and to go on a team-building adventure. It’s also a great time for you to expose yourself as his better half and to charm his coworkers with your casual and leisure attitude.

The final week of October offers a majestic opportunity for the Virgo man to explore the expression of his feelings, and to start the verbal and psychological healing he has been craving and needing in the past couple of years. Now is also a great time to buy a new vehicle, so going window shopping can prove to be an excellent date idea.

Let’s Love Each Other

The first week of October casts light on the Virgo man and his needs (Mercury in Virgo, his first house) versus the needs and wants of his partner or lover (the Moon conjunct Neptune Retrograde in Pisces, his seventh house).

This is an interesting transit as it lets the Virgo man reevaluate his own needs versus his partner’s, and he can learn to differentiate between being of service and actually showing emotions.

This first week teaches the Virgo man how to go about expressing his emotions, and in turn, how to recognize his partner’s or lover’s emotional needs and wants – and in the end, fulfill them.

This is a very important week for the Virgo man’s inner development and emotional growth. It also touches upon his financial state and that of his partner through the opposition of Venus and Jupiter Retrograde taking place in Libra and Jupiter, respectively.

This week presents a good time for healing of emotional wounds, deep emotional conversations that are open and direct in their nature, and talking about finances.

Aries Full Moon – Feisty All Around!

The second week puts focus on the second house, and this means that the Virgo man will be forced to take a closer look at his finances, as well as his tendency to let his lover or partner spend more than he can afford.

Hard conversations about money and spending can be expected during this week, especially around the 9th and 10th of October, when the Full Moon in feisty Aries takes place.

The Moon is not there by itself, it conjuncts Retrograde Jupiter, which can give it extra power and expansive influence, so words spoken now could be the ones he has suppressed too many times before.

This week’s aspects affect his job and his career field as well, which means that he might find himself in a crossfire between his subordinates and his superiors. A tough place to be in – between the hammer and an anvil.

This can be a productive week if the Virgo man takes heed of the emergencies around him, and he takes extra time to learn how to express his needs and wants when they arise, instead of waiting and letting them turn into passive anger.

Read also: How Much Space Does a Virgo Man Need?

Carry On, My Wayward Son

The third week acts as a conduit for the Virgo man’s ambitions and goals when it comes to his career, public, and social life. This is a great time for him to act on his impulses and create better venues and ventures for himself at work.

His superiors will recognize his hard work and favor him at this time, so it’s a good time to ask for a raise or to rise in the ranks at work. This is also a great time for him to announce his relationship with the world.

Later on, in the third week, there are fertile transits for his social life and status. So it’s a perfect time for you to make your grand entrance as his devoted partner, and to meet his colleagues in a more casual setting.

Drinking is not advised for him at this point in time, as it can influence him to overshare the inner workings of his mind, and some people from his immediate environment might not be ready for that. This is why it’s a good time to practice social restraint in public places and to let loose in the bedroom.

The fourth and final week marks significant improvements in the Virgo man’s life. First, he will have the honor of being a center of attention, and mostly his lover’s or partner’s attention – good for him, it means he learned his lesson about speaking up about his feelings!

Then his finances will feel like a dash of fresh air, and he’ll be able to take you out on a fancy date and woo you with his kind words.

Then there’s the New Moon Eclipse in Scorpio, his third house, that is excellent for planting the seeds of deep and emotional communication that the Virgo man has lacked his entire life.

This fourth week presents an amazing opportunity for him to explore and express the inner workings of his mind and to buy a new car, one that will be much more suitable for his style and current needs.

This fourth week is an amazing end to a pretty challenging month for the Virgo man, and now is the right time for him to plant the seeds of communication! It’s also a great time for him to seek professional help (aka therapy) where he’ll feel safe and intimate enough to share his anxiety and burdens he’s been feeling much more pressing in the years of late.

There you have it, my dears, the Virgo man’s October at the palm of your hand. He’ll be extra touchy during this month, considering all the Retrogrades and transits, but this month will be a good thing for him in the long run.

He will learn to face his feelings and expression of his emotions, and he will attain professional confidence and experience a rise in social stature.

This is a good month, all in all, for the Virgo man, despite his mood being gloomy and sour most of the time. He just needs the time and space to adjust to all the changes, and he’ll be good as new in November.

I recently wrote an article about a Virgo man’s texting style. You might want to give it a look before November approaches, it’ll help you ease through the challenging periods or misunderstandings. Trust me on this one.

All the love and happiness in the world.